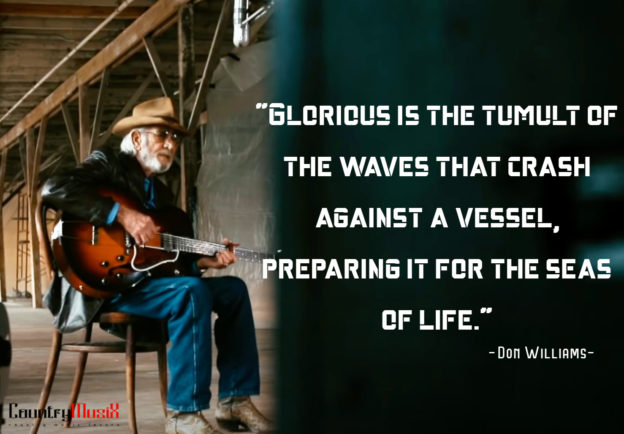 Well known Country Music Legend Don Williams birth name was Donald Ray Williams (May 27, 1939 – September 8, 2017) was an American country singer, songwriter, and 2010 inductee to the Country Music Hall of Fame. Don Williams is indeed one of a kind. He can already be considered a legend. And one of the big names in the country music industry. Many present country music artists get inspired by Don Williams Great Music and legacy. He started his massive solo career in 1971, letting people hear his most popular ballads and amassing 17 number one country hits. He is granted a straightforward yet smooth bass-baritone voice, soft tones, and all these led him a name to be known to the world as “The Gentle Giant”, creates mellow and warm sounds. Perhaps, it’s due to his smooth baritone voice.

In 1975, Apart from Music, Don Williams cast as “Leroy” with Burt Reynolds and Jerry Reed in “W.W. and the Dixie Dancekings”, Which is a comedy movie. Artists of different genres and various recording artists had a strong influence on Don Williams music. Many Country artists like Johnny Cash, Kenny Rogers, Charley Pride, Waylon Jennings, Alan Jackson had been covered with great hits of Don Williams. Don Williams’s music also popular worldwide, including in Australia, New Zealand, UK, Ireland, Ukraine, India and many African Countries like Ethiopia, Cameroon, Nigeria, Ghana, Kenya, Malawi, South Africa, Sierra Leone, Uganda, Namibia and Zimbabwe. Unfortunately, he is one among the hundreds of artists list, whose material was reportedly destroyed in the 2008 Universal Studios fire.
Don Williams was born on May 27, 1939, to Loveta Mae and James Andrew “Jim” Williams in Floydada, Texas. He has two elder brothers. In 1958, Don graduated from High school in Portland, Texas. Later his parents divorced and his mother remarried. In 1963, Kenneth, Don’s eldest brother died after electrocuted accidentally. Don Williams served for two years and honourably discharged from US Army Security Agency. And he has done many odd jobs to support his family. “Pozo-Seco Singers” was a Folk-Pop band which form by Don Williams, Susan Taylor and Lofton Cline. They have done several records for Columbia Records. Williams was with them till 1969 and then it disbanded.

“Tulsa Time”
Song written by Danny Flowers and recorded by Don Williams in 1978. This single was from William’s album “Expressions”. Song was his eighth #1 on the charts. The song was among Top 40 for eleven weeks. This Song got remarkable reviews from the audience.

“I believe in you”
Song was written by Roger Cook with Sam Hogin. and it was about the power of love, In 1980, released by Don Williams and the single is from the album “I Believe In You” This hit was his eleventh #1 hit on the Country charts. The song was a hit in Europe, Australia and New Zealand. “I Believe in you” was reached #25 on the Top 40 Chart in the US.

“You’re my best friend”
This Song’s lyrics are about implying trust and faith in your significant other and a message of loyalty from a husband to his loving wife. The story isn’t a typical friend or better of friends of people. It is a story between a husband and a wife. loving each other deeply. Spouse is always an answer for any trouble in life, always be there to support and share each other in difficult times. They are continuing their life journey full of love and as best friends.

“Lord, I Hope This Day Is Good”
The Song was written by Bob McDill and Performed by Don Williams. This Single was his twelfth #1 hit on the Country charts. The “Gentle Giant” has placed a complete of seventeen number-one singles on the country charts. A remarkable achievement for a specific country singer to succeed in. This is only proof that Don Williams was embraced and can continuously be loved by the county music enthusiasts forever and ever. The song is indeed one among the simplest traditional country and western. The words and lyrics depict a superb relationship with the Lord. Also, the melody can warm your spirits.

“Amanda”
The Song was written by Bob McDill.Williams Sang about a Gentleman’s Wife, “Amanda”. The song “Amanda” was first recorded and released by the country icon Don Williams within the summer of 1973 because of the flip side of his No. 12 hits “Come Early Morning.” And Single became #33 on the Billboard Hot Country Singles chart that year. Though this song wasn’t one among Don Williams’ biggest hits, it’s absolutely an unforgettable segment of his discography also as in his television performances from the Start of the 70s.
Single Was Written as an Apology, Bob McDill, who has supplied Williams with his early major hits, like “If Hollywood Don’t Need You,” “Good Old Boys Like Me,”. and “(Turn Out the Lights And) Love Me Tonight,” “Come Early Morning,” and “It Must Be Love.”

“I’m just a country boy”
Yes, money can purchase anything you would like but not everything you would like. It gives an image of getting the pleasure of a sparkling diamond stone, the inclination of approval, and therefore the feeling of satisfaction. However, it does not provide you with contentment and delight. But “love” or a “truthful love” can undeniably offer you bliss. Undoubtedly, it’s the one entity that wealth can never devour. It represents the comprehensions with its simple yet direct lyrics. It becomes more appealing with a patch of suave harmony and slightly of smooth vocals.

Here are Don Williams Songs, Enjoy and let us know your favourite song below in the comment section,